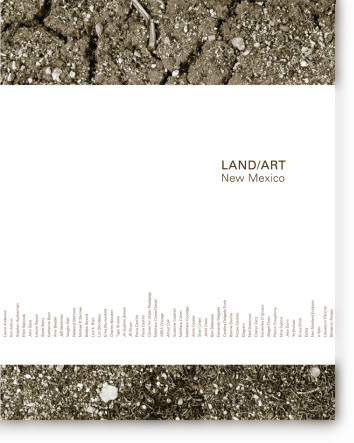 The “land art” movement emerged in the 1970s when some adventurous artists departed the New York gallery scene to make art in the open landscapes of the American West. Some of the most famous examples include Robert Smithson’s Spiral Jetty, James Turrell’s Roden Crater in Arizona, and Walter De Maria’s The Lightning Field in New Mexico. Since then, the land art genre has been subsumed under the more general term “environmental art,” which recognizes that what we now think of as the “environment” has broadened to include the global community, the microscopic world, cyber space and suburban sprawl as well as wilderness and the urban environment. It also includes ecological activism, reclamation and remediation projects, and ephemeral site-specific performances, among many other approaches, all of which have in common art and artists that respond to features of our natural environment.

In the summer and fall of 2009 a group of New Mexico arts organizations joined together to present LAND/ART, a large-scale collaboration, which explored the relationship between land, art, and community through exhibitions, site-specific art works, lectures, and performances. Focusing on “environmental” or “Land” art, the collaboration addressed our changing relationship to nature, and to offer a new or previously unconsidered understanding of the places in which we live. This book is the culmination and documentation of this six-month, and features the work of over forty artists including Michael Berman, Erika Blumenfeld, David Taylor, Basia Irland, Patrick Dougherty, Catalina Delgado Trunk, and Shelley Niro.

LAND/ART was organized by 516 ARTS in Albuquerque.

Bill Gilbert holds the Lannan Chair in Land Arts of the American West in the department of art and art history at the University of New Mexico.

Kathleen Shields is an arts writer and curator who has written for many publications including Art in America. She is the administrative director of the Elizabeth Firestone Graham Foundation, as well as the administrator of The Lightning Field for Dia Art Foundation.